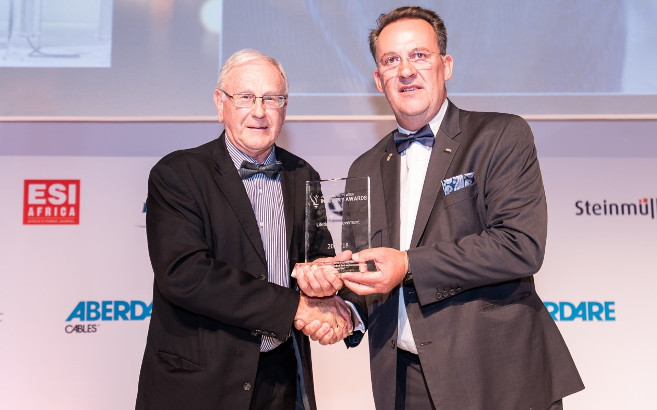 Over 600 guests from 30 countries attended the glamorous black-tie event, many of them Africa’s most renowned power and water industry professionals. Schulze was selected winner of the Lifetime Achievement Award by a panel of 22 international judges.

‘This is a proud and emotional moment and a humbling experience,’ said Schulze, who also reflected on the individuals and institutions who influenced his outlook and success, including his parents whose dreams were cut short by the Great Depression, leading them having to curtail their schooling at the age of 14 to start work.

Schulze, who completed his undergraduate, Honours, Masters and PhD studies at the then-University of Natal, began his career as a high school teacher of Science and Mathematics, joining his alma mater in 1969 where he worked until formal retirement in 2007. He piloted South Africa’s first hydrology degree course in the early 1980s; the discipline grew under his leadership to form the CWRR, now training more than 150 undergraduate students and 30 postgraduate students from around the world annually.

Schulze was also visiting professor at the IHE Delft Institute for Water Education in The Netherlands and at the Swedish Meteorological and Hydrological Institute. He has been involved in more than 100 short courses on hydrological modelling and climate change in South Africa, Africa and Europe.

Schulze’s involvement in national and international level hydrological research spans more than 50 years. For the past 30 years, he has been pursuing applied climate change research. Landmark achievements include development of the Agricultural Catchments Research Unit (ACRU) agro-hydrological modelling system and the SCS-SA design hydrology simulation model.

He has over 600 varied publications to his name, from refereed journal papers to books and popular articles, with further publications forthcoming. He has spent six sabbaticals at institutions in the United Kingdom, Germany, the United States and The Netherlands. Schulze has supervised 67 Masters and 20 PhD students, with eight students currently under his supervision. His graduates have gone on to make a considerable impact in various sectors.

We use cookies on our website to give you the most relevant experience by remembering your preferences and repeat visits. By clicking “Accept All”, you consent to the use of ALL the cookies. However, you may visit "Cookie Settings" to provide a controlled consent.
Cookie SettingsAccept All
Manage consent

This website uses cookies to improve your experience while you navigate through the website. Out of these, the cookies that are categorized as necessary are stored on your browser as they are essential for the working of basic functionalities of the website. We also use third-party cookies that help us analyze and understand how you use this website. These cookies will be stored in your browser only with your consent. You also have the option to opt-out of these cookies. But opting out of some of these cookies may affect your browsing experience.
Necessary Always Enabled
Necessary cookies are absolutely essential for the website to function properly. This category only includes cookies that ensures basic functionalities and security features of the website. These cookies do not store any personal information.
Non-necessary
Any cookies that may not be particularly necessary for the website to function and is used specifically to collect user personal data via analytics, ads, other embedded contents are termed as non-necessary cookies. It is mandatory to procure user consent prior to running these cookies on your website.
SAVE & ACCEPT

This function has been disabled for CV